About the Golden Eagles

The Golden Eagle Concert Band (GECB) is a 60 piece all-volunteer adult community band, consisting of men and women of all ages and backgrounds. The GECB is active throughout the Denver metropolitan area and Colorado, specializing in American band music from the turn of the 20th century through the 1940s, by composers such as John Phillip Sousa, Karl King, Jerome Kern, George & Ira Gershwin, George M. Cohan, and others of that era. The band has recently added to its repertoire music composed for concert band by 21st-century contemporary artists. The organization is a full-fledged concert band, including brass, reed and percussion instruments.

The GECB plays concerts for the general public, nursing homes, hospitals, festivals, 4th of July celebrations, churches, and private organizations. The GECB has been the featured band for Golden’s and Edgewater’s Independence Day celebrations for a number of years. Many concerts are free to the public.

The GECB rehearses weekly throughout the year, except in December.

A BRIEF HISTORY OF THE GOLDEN EAGLE CONCERT BAND

The Golden Eagle Concert Band (GECB) is a 50-piece all-volunteer adult community band consisting of men and women of all ages and backgrounds. The GECB is active throughout the Denver metropolitan area and Colorado, presenting band music in the style of the early 20th century to the present.

Founded in 1977, the Golden Eagle Concert Band was originally called the Gold Nugget Brass Band and was owned and directed by Don Smith, a former circus trumpet player. After fourteen years, Don Smith decided to retire and started to dissolve the band, but the band members wanted to continue playing, so they changed the name to the Golden Eagle Brass Band and formed a corporation to operate the band. Various members of the band have taken up the baton between hiring conductors like Dorsey Hudson, John Williams, Scott Christie, and Tucker Ewer.

In 1996, the GECB became an IRS 501(c)(3) non-profit organization which made the band eligible for grants from corporations, foundations, and the Scientific and Cultural Facilities District (SCFD). The GECB has received grants from the SCFD Tier III in Arapahoe, Broomfield, Denver, Douglas, and Jefferson counties and private donations. In 2007, the Band changed its name to the Golden Eagle Concert Band, which more accurately represents what the band is – a traditional concert band.

The goals of the Golden Eagle Concert Band are: (1) to perpetuate the music and tradition of the American hometown civic band that provides opportunities for families to spend quality time together while listening to concert band music; (2) to provide enlightening and entertaining concerts for the public; and (3) to further opportunities for adult musicians with various levels of proficiency, to develop their musical skills and participate in a concert band at no cost. 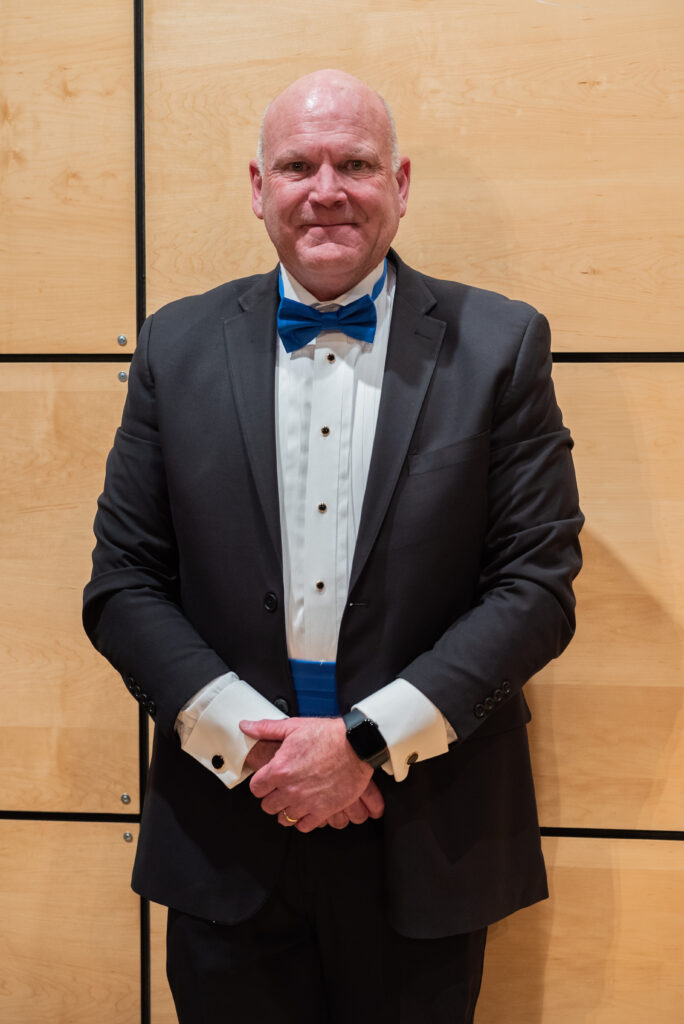 He retired from Douglas County Schools in 2013 after teaching middle school and high school band for 27 years. During his time in Douglas County, his bands received numerous awards and traveled throughout the U.S. and Europe.
He received the Who’s Who Among American Teachers distinction five times.
Mike earned his Bachelor Of Music Education Degree from the University of Northern Colorado and his Masters of Education Degree from the University Of Colorado in Denver.

Currently, Mike is teaching elementary band in Douglas County. Mike is also on staff with the Colorado Honor Band Association, teaching Intermediate Band.
Mike is also on faculty at Colorado State University where he teaches Brass Methods in the Music Education Department. Mike was the principal conductor of The John Philip Sousa Band of Colorado in 2016 and 2017.

Mike is also on faculty at Colorado State University, where he teaches Brass Methods in the Music Education Department. In addition, Mike was the principal conductor of The John Philip Sousa Band of Colorado in 2016 and 2017.

Bob has been with the Golden Eagle Concert Band for over 10 years, both playing the French horn and conducting. Bob earned his bachelor’s degree in music education from Western State College in Gunnison. He and his wife, Sandi, have three sons – one in Missouri and two here in Denver. In his spare time, Bob can be found working with his honeybees or on his “honey-do” list.