Musician of the Month 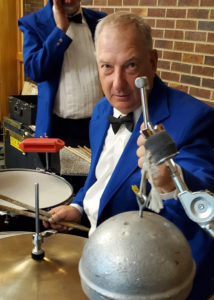 Randy has a music education degree from Metropolitan State College and a Masters in Music Education from the University of Northern Colorado. He has taught music in several Colorado school districts as well as being the percussion instructor at Mesa State College, an instructor with Blue Knights, Rocky Mountain Magic, and the Americanos Drum and Bugle Corps. He was a founding member of the Rocky Mountain Percussion Association with Smoky Hill H.S, Cherry Creek H.S. and the Smoking Cherries percussion ensembles.

He also has performed with The Hot Tubs Jazz Band, Educated Groove, Double Jack Water Back, Jumpstart Blues Band, The Thunderbird Band, The Memories Dance Band, and others.

Besides playing with the Golden Eagle Concert Band, Randy is the Owner and Operator of Dobbs’ Home Improvements which is a small construction company remodeling and building kitchens, baths decks, and basements. Besides beating the skins at rehearsals he enjoys beating on others when he plays hockey twice a week. His lovely wife Bonnie is his greatest groupie enjoying concerts, her retirement, and two grown boys who are on their own.